He is survived by his wife of 64 years, Mary Louise Wildenstein Abreu, her brother Rudy, and her sister Frances Neatherlin. He is also survived by his eight children: Jim (Pam), Ernest Charles, Bob (Sylvia), Don (Ida), John, Rick (Denise), Loretta, and Michael (Michelle). All are of Las Vegas, NM except Bob in Rio Rancho and Michael in Alexandria, VA. Ernest has 21 grandchildren, 26 great-grandchildren, and one great-great-grandchild and numerous other family members. Ernest is also survived by his only brother, Edward Leland Abreu of Taos and Leland's children Edward, Arthur, Celina, Katrina and Nina and their children and grandchildren.

In the 1930s he lived in Terrero, NM and Jerome, AZ when his dad worked in the mines. The family moved to Las Vegas, NM in 1942 when his father found work with the railroad. The family lived in different places in Las Vegas, including a family farm south of town where they raised crops, had a milk cow, horses, rabbits and chickens. They swam in the local swimming hole "La Guitara" when he was a kid. Ernie rode his horse to school in town while they lived there. In 1961 Ernie bought the old Lucero home on Moreno Street where the family has lived ever since.

Ernest was in the initial freshman class of boys at West Las Vegas High School when it was founded in 1947. WLVHS admitted girls the following year and his future wife, Mary Louise Wildenstein, attended then. They met at a dance party for high school students at the Highlands Golf Course Clubhouse. Ernie was the fullback on the first undefeated WLV football team in 1950 and also played basketball, baseball and ran track. When WLVHS was temporarily closed in 1951, he attended Immaculate Conception High School and graduated from there along with his brother, Leland. After high school, while working at a local gas station, Ernie was told by his former high school coach Gillie Lopez that he had obtained Ernie a football scholarship at Highlands University, so he could afford to go to college - the first in his family. Gillie promised Ernie a job as soon as he finished school. Ernie finished college in 3 years. At Highlands he played football, basketball and baseball. He graduated in 1954 and started working at the reopened WLVHS as a teacher and coach - the first year of a 36-year career in education. He completed all his schoolwork and athletics at Highlands while he was married, working, and had the first 2 of his 8 children. Ernie taught history and driver's education, was head football coach, and assisted with other sports at West Las Vegas. He coached football for six years and had many great athletes and teams while running the famous "single wing" offense. He coached the North for the 1960 North-South All-Star football game in Albuquerque and was always proud that the North won that game 20-0, with two of his WLV players on the team, Mabry Vigil and Robert Lopez. Then the Christian Brothers at St. Michaels High School recruited Ernie to coach. He taught and coached in Santa Fe from 1961 to 1965 and they won their first football State Championship in 1964 running the single wing offense beating St. Mary's of Albuquerque, 12-6. He also was the basketball assistant to Dick Shelley who coached the "Mighty Midgets" of St. Mike's. Again, he coached many great players and teams and made many friends in Santa Fe. He was especially close to the Christian Brothers: Brother Abel, Abdon, Brendan Abel, and Bernard. Ernie was asked to return to WLV in 1965 as an administrator and eventually became interim Superintendent. In 1971 he went to Mora for 10 years as Superintendent. While there he obtained money to build a new Elementary, Middle, and High School, a new gymnasium, and a swimming pool. He returned to WLV for a couple of years as Superintendent, and then went to Wagon Mound as Assistant Superintendent and Principal. He then became the second Executive Director of the Northeast Regional Education Cooperative in 1985. He retired from there in 1990 after 36 years of service.

In retirement, Ernie continued his lifelong passion for hunting and fishing (he was an expert hunter), stayed at his cabin at Morphy Lake, had regular family barbecues, visited with old friends and family all over New Mexico, and went to the casinos, where he frequently won. He continued playing basketball and was a member of the "Sharpshooters" Senior Olympic Basketball team from Santa Fe that won the State Championships for 10 years straight from 1990 to 2000. They participated in the National Senior Olympics 5 times in various places like Florida, Louisiana and Arizona. He got to play with his long-time family, team-mates and friends Leland Abreu, Pete Alarid, Leo Segura, Don Lithgow, Bobbie Rodriguez, Ray Martinez, and Billy Lucero and others. They had all lost a step or two, but they could shoot your lights out - and then tease you about it.

In recent years Ernie was honored by being invited to the Class of 1962, 50-year class reunions for both West Las Vegas and St. Michaels. He relished meeting and reminiscing with his old students and athletes. He also attended the 2015 Homecoming at St. Mike's celebrating the 50-year anniversary of the 1964-65 State Championship Team where he was presented a Championship ring by his athletes. He enjoyed attending games of his favorite teams, including the WLV Dons, St. Mike's Horsemen, Mora Rangers and the Robertson Cardinals. He had played for, taught and coached the Dons and three of his sons and his daughter graduated from WLV and played for them. He taught and coached the Horsemen and two of his sons attended school and played ball there. He was Superintendent in Mora and four of his sons graduated from and played there. Many of his grandchildren played for the Dons and Cardinals and graduated from WLV and ELV. He supported them all and was proud of them equally. He really was a WLV Don at heart, but he cheered for all his old schools, mainly at the NM State Basketball Tournament, which he recently attended and enjoyed immensely. He left a lasting legacy and taught many important lessons to young people. Former students and players always told him that he had changed their lives.

Ernie loved his family. He always had time for his children, daughters-in-law, grandchildren and great grandchildren. He managed to keep track of who was where, what special events were coming up, what they were working on, and what they had achieved. He cheered them on, supported their dreams, and shared his wisdom and advice. He was a winner. Ernie Abreu will be missed.

Services are April 2, 2016 at 10:00 am with Rosary and Mass at Our Lady of Sorrows Catholic Church in Las Vegas, NM. His ashes will be interred at a later date at the Abreu Family Cemetery in Rayado, NM. Please visit Rogers Mortuary website: - See more at: http://www.legacy.com/obituaries/abqjournal/obituary.aspx?n=ernest-beaubien-abreu&pid=178118041&fhid=10279#sthash.COKOGwiJ.dpuf 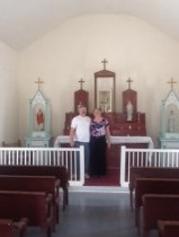 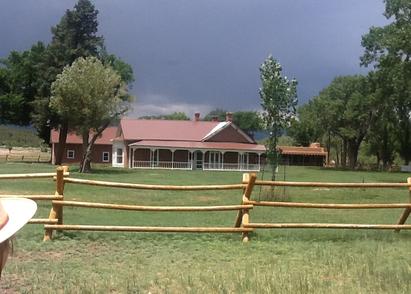 2013 photos of outside of Rayado Church

and my wife and I inside the church

My 2013 photo of Abreu Cemetery in Rayado 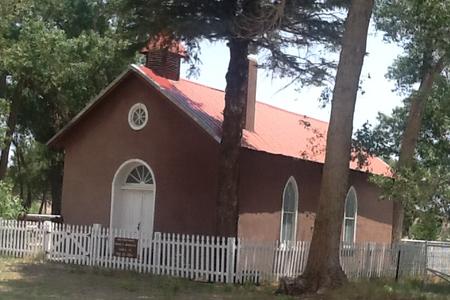 PEACEFUL SETTING OFF I-25 IN NORTHERN NEW MEXICO

My 2013 photo of replica of Maxwell home in Rayado 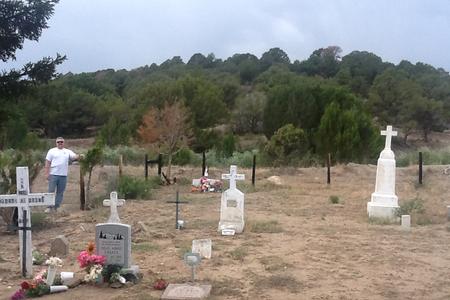