PEACEFUL SETTING OFF I-25 IN NORTHERN NEW MEXICO 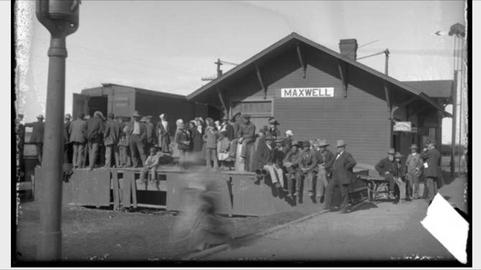 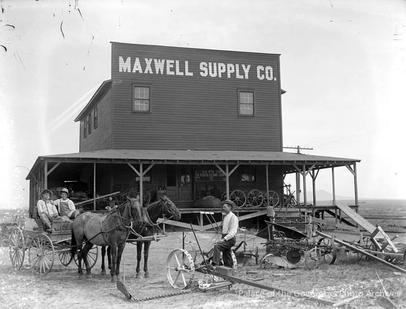 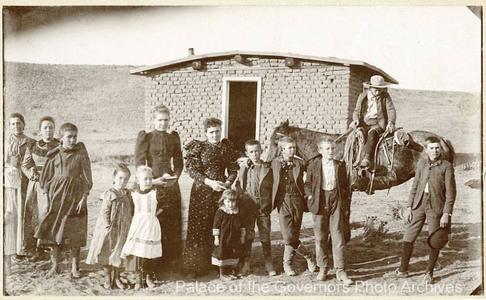 The Maxwell Supply Company in Maxwell, NM., from 1910. Palace of the Governors Photo Archives.
‪Janet Hoy:  Charles said it was directly north of where the Hoy Lumber yard was, east of where the Catholic Church was...where Bea Mares lived.  Thanks to Tasha Martin!

The old railroad used to run down 6th street, and here's a part of the railroad depot still standing on the Casper's back field.

I have to wonder if the blur is Wrangler's ancestor...

Maxwell (UPI) -- A tornado sawed a three-block-wide swath through the middle of this small northeastern New Mexico twon shortly after noon Friday.
One person was killed and five injured.
Ten structures, including homes, farms and a tavern, were demolished when the wind wheeled through town from the west, almost directly along main street, Maxwell is on US-85, 27 miles south of Raton.
The victim was identified as SEVERLO CHAVEZ, 85, owner of the tavern.
The injured were taken to Colfax County General Hospital at Springer, 12 miles to the south. They were identified as:
MATILDA CHAVEZ, 77, the dead man's sister. She was in critical condition. She suffered bruises on the chest and back and had a gash on her face.
ANGELO NEOFF, 69, who had cuts on his head.
MRS. JEWEL WILSON, 83, who suffered multiple cuts and bruises.
FLORA FUDGE, 64, who was in shock.
ISABELLA BARELD, 73, who suffered cuts and bruises and had a broken shoulder.
The tornado touched down out of black and ominous clouds. It moved rapidly southeast across the New Mexico countryside and would have missed Maxwell, an eye-witness said, if it had not turned northeast near the town.
Before it reached Maxwell, the tornado destroyed two farm homes west of town owned by brothers BILL and CELIO BALZANO. They escaped uninjured but equipment, stock and buildings were demolished. A witness said a steel hayrake at the BILL BALZANO farm was tangled like rope by the force of the wind.
At another house, owned by CHRISTINA PESAVENIO, the main structure was left standing but the barn and outbuildings were destroyed.
State Police estimated damage at $100,000. National Guardsmen were called out to prevent looting in the town of about 500 population. Rescue workers descended in force.
In downtown Maxwell, large trees were uprooted and windows shattered. Communication lines were blown down and the community isolated.
MRS. JESS BARTLETT and her son, R. E. BARTLETT, were returning from a shopping trip to Raton when they saw the tornado marching eastward across the plains.
"It was a big, black funnel," MRS. BARTLETT said. "We could see the dirt swirling around in it. I told my son it was going to tear everything up, but at first we thought it missed Maxwell."
"When we got there the place where it went through was a complete wreck. Trees were all broken up and turned up. The houses were demolished. One house was filled full of trees. ANITA VAN BRUGGEN, who lives there, was in Raton at the time.
"My husband was out at our place about a mile south of Maxwell. He saw it coming. He tried to warn everyone on the telephone but the phone lines already were down."
"The tornado would have gone south of Maxwell if it had kept moving southeast. But then it turned northeast and went almost right along main street. It went on beyond town to the Canadian River about a quarter of a mile away and broke up."
Witnesses said it took just two minutes for the tornado to wreck its havoc on Maxwell.
CHAVEZ was crushed in the wreckage of the cinder block tavern building. His body was recovered two hours later when bulldozers cleared the wreckage.
NEOFF said he was eating dinner when the tornado hit.
"I heard a noise, but didn't know where to go. Then all of a sudden the house collapsed on me," NEOFF said. "When I first heard the noise, I thought it was a bomb. I could see it was a tornado, but I just didn't know which way to go. I was lucky because the walls collapsed together and left an open space for me in between. 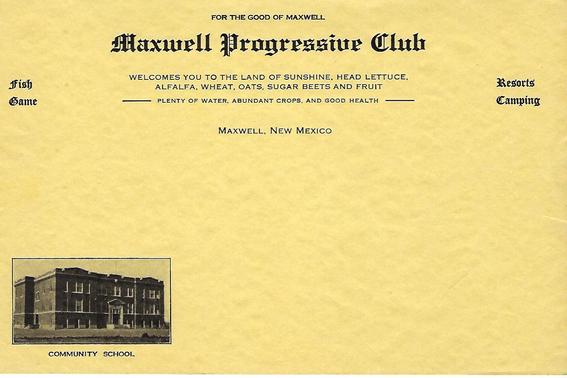 DURING WWII, Maxwell was proposed as a site to intern Japanese American prisoners.

"In March of 1942 a plan by Mr. L.E. Detwieler of New York began circulating in New Mexico. Mr. Detwieler proposed buying land to help colonize between forty and sixty thousand Japanese-Americans in Maxwell, New Mexico. An immediate outcry from the citizens of New Mexico began, and letters flowed into the governor’s office protesting the proposal. A petition signed by 111 people stated: “We the people of Maxwell and vicinity do hereby petition the Honorable Governor John E. Miles that we the people do not want a colony of Japanese on our peaceful community. As most of our boys are in the army fighting the Japs, we do not feel that we want the Japs to take their place.”

A group of thirty-six large landowners, on the other hand, approved the plan and sent a petition to the governor. “The undersigned property owners of the Maxwell Irrigation District in order to make our position clear on the question of locating a colony of Japanese farmers on the Maxwell tract, do hereby certify that we have no objection to the sale of land in said Maxwell tract to Japanese farmers who are American citizens now being evacuated from California and we feel that such sales will benefit the community.” They also claimed that many of those who had signed the petition opposing the plan were not property owners in the vicinity. One of the landowners, F.A. Brookshier, wrote: “During my twelve years of teaching school including nine years here as superintendent, I have taught racial tolerance and the rights and duties of American citizens. This is a part of the democratic process.”